Understanding and using regular expressions properly is a valuable skill when it comes to text processing. Due to their declarative yet idiomatic syntax, regular expressions can sometimes be a source of confusion (even anxiety) amongst software developers. In this article, we’ll implement a simple and efficient regex engine. We’ll define the syntax of our regular expressions, learn how to parse them and build our recognizer. First, we’ll briefly cover some theoretical foundations.

In informal terms finite automaton (or finite state machine) is an abstract machine that has states and transitions between these states. It is always in one of its states and while it reads an input it switches from state to state. It has a start state and can have one or more end (accepting) states.

In Fig 1.1 we have automaton with four states; \(q_0\) is called the start state and \(q_3\) is the end (accepting) state. It recognizes all the strings that start with “ab”, followed by an arbitrary number of ‘b’ s and ending with an ‘a’.

If we process the string “abba” through the machine on Fig 1.1 we’ll go through the following states:

For the strings “aba”, “abbba” or “abbbbba”, the automaton will end up in the accepting state of \(q_3\). If at any point during processing, the machine has no state to follow for a given input symbol - it stops the execution and the string is not recognized. So it won’t recognize “ab” as it will end up in the non-accepting state of \(q_2\) and “abca” as there’s no transition on the symbol ‘c’ from \(q_2\). In the example of Fig 1.1, at each state for a given valid input symbol, we can end up in exactly one state, we say that the machine is deterministic (DFA).

Suppose we have the following automaton:

We can see on Fig 1.2 that from \(q_1\) on input ‘b’ we can transition to two states - \(q_1\) and \(q_2\). In this case, we say that the machine is nondeterministic (NFA). It is easy to see that this machine is equivalent to the one in Fig 1.1, i.e. they recognize the same set of strings. Every NFA can be converted to its corresponding DFA, the proof and the conversion, however, are a subject of another article.

We represent an ε-NFA exactly as we do an NFA but with one exception. It includes transitions on the empty string - ε. That means from one state we are able to transition into another without reading an input symbol. These transitions are usually denoted with the Greek letter ε (epsilon).

Algebras of all kinds start with some elementary expressions, usually constants and/or variables. Then they allow us to construct more complex expressions by applying a certain set of operations to these elementary expressions. Usually, some method of grouping operators with their operands such as parentheses is required as well.
For instance, in the arithmetic algebra we start with constants such as integers and real numbers, we include variables and using arithmetic operators, such as +, ×, we build more complex expressions. The regular expressions are in a way no different. Using constants, variables, and operators as building blocks, they denote formal languages (sets of strings).

To compile a regular expression \(R\) to an NFA we first need to parse \(R\) into its constituent subexpressions. The rules for constructing an NFA can be split into two parts:

On Fig 2.1 we have an automaton that recognizes the empty string ε. \(i\) is the start state and \(f\) is the accepting state.

Figure 2.2: Finite automaton for the expression a

On Fig 2.2 we construct an automaton for the symbol ‘a’. We treat each symbol of the input alphabet as a regular expression by itself. The language of this automaton consists only of the word “a”. 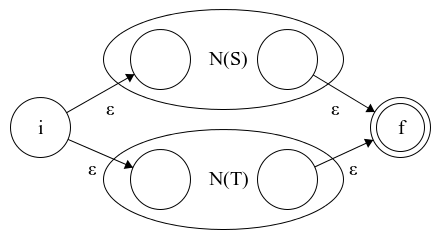 Figure 3.3: NFA for the closure of a regular expression.

The closure (*) operator has the highest precedence, followed by concatenation \((\cdot)\). The union \((\vert)\) is the operation with the lowest precedence. Modern regex implementations have additional operators like + (one or more), ? (zero or one), their implementation, however, is analogous to the ones above and we’ll skip them for the sake of brevity.

Let’s go through an example case. We want to construct an NFA for (a∣b)*c. The language of this expression contains all the strings that have zero or more ‘a’ s or ‘b’ s and end with ‘c’. Just like in arithmetic expressions, we use brackets to explicitly specify the operator precedence. We break the expression into its atomic subexpressions and build our way up. By the order of precedence we: 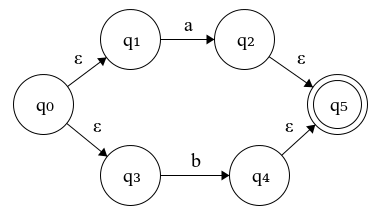 First, we need to preprocess the string by adding an explicit concatenation operator. We’re going to use the dot (.) symbol, as described in the paper. So for example, the regular expression \(abc\) would be converted to \(a \cdot b \cdot c\) and \((a \vert b)c\) wound turn into \((a \vert b)\cdot c\) You can check the implementation here.

The modern implementations use the dot character as “any” metacharacter. They would also probably build the NFA during parsing instead of creating a postfix expression still doing it this way would let us understand the process more clearly.

There are several ways of parsing a regular expression. We’ll follow through Thompson’s original paper and that is by converting our expression from infix into postfix notation. This way we can easily apply the operators in the defined order of precedence.

We won’t delve into the technical details of this algorithm. You can check my implementation in less than 40 lines of javascript here and a neat explanation with more examples here.

We represent an NFA state as an object with the following properties:

From our basis, we have two types of NFA’s that would serve as our building blocks: an ε-NFA and a symbol-NFA. This is how we implement them:

The NFA is simply an object which holds references to its start and end states. By following the inductive rules (described above), we build larger NFAs by applying the three operations on smaller NFAs.

Now is time to put it all together. We scan our postfix expression one symbol at a time and store the context in a stack. The stack contains NFAs.

Let’s simulate the algorithm on (a∣b)*c

The simplest way to check if a string is recognized by automaton is by computing all the possible paths through the NFA until we end up in an accepting state or exhaust all the possibilities. It falls down to a recursive depth-first search with backtracking. Let’s see an example:

The automaton in Fig. 5.1 recognizes either the string “aba” or “abb”. If we want to process “abb”, our simulation with recursive backtracking would process the input one state at a time so we’ll first end up reaching \(q_3\) after reading “ab” from the input string. The next symbol is ‘b’ but there’s no transition from \(q_3\) on ‘b’, therefore, we backtrack to \(q_0\) and take the other path which leads us to the accepting state. You can check out my implementation on GitHub.

For the automaton on Fig 5.1 we ended up going through all of the possible two paths. This doesn’t seem like a big deal but in a more complex scenario, there might be considerable performance implications.

Given an NFA with n states, from each of its states, it can transition to at most n possible states. This means there might be a maximum \(2^n\) paths, thus in the worst case this algorithm will end up going through all of these paths until it finds a match (or not). Needless to say, O(\(2^n\)) is not scalable because for a string of 10 characters to check whether it’s matched or not we might end up doing 1024 operations. We should certainly do better than that.

Being in multiple states at once

We can represent an NFA to be at multiple states at once as described in Thompson’s paper. This approach is more complex but produces significantly better performance.

We also have to mark the ε-transition states as visited to prevent infinite looping. The bottom of the recursion is when we reach a state with no ε-transitions. This is the code or the search procedure:

Given a string of length n, on each iteration, this algorithm keeps two lists of states with a length of approximately n. This gives us a time complexity of \(O(n^2)\) which significantly outperforms the recursive backtracking approach. We can optimize it by converting the NFA to an epsilon-free NFA and even further by converting it to a DFA. DFAs guarantee \(O(n)\) recognition complexity but we might end up having \(2^n\) states due to the state explosion problem.

Putting it all together

We started by learning about finite automata and how do they work. We classified them as deterministic and nondeterministic. We also introduced the concept of ε-NFAs which are a specific type of nondeterministic automata. We’ve seen how NFAs and DFAs have the same expressive power and how they can be used for string recognition.

We defined the building blocks of the regular expressions and learned how by applying operators (concatenation, union, and closure) we can construct more complex expressions from smaller ones. Then we learned how to compile a regular expression into its equivalent NFA then implemented an algorithm that processes a string through an NFA to determine whether it is matched or not.

The complete code reference for this article is available on GitHub.

Update: You can also check out the article on “Parsing Regex with Recursive Descent” which presents a different approach. You can find an example of converting a regex to a parse tree and an NFA construction based on the traversal of this tree. Here and here is the implementation of the alternative compiler.