Text rewriting is a programming task when parts of a given input string are replaced with other strings. Applications of this process include text highlighting, annotation, lexical analysis, normalization, etc. Because such tasks arise quite often in practice, many programming languages provide built-in text rewriting APIs. Those APIs, however, often go beyond the realm of regular languages, but rewriters based on regular expressions are still very powerful and can to solve most of the translation tasks that occur in practice.
In this article, we’ll describe the process of text rewriting from a set-theoretic perspective and define the relevant formalisms. We’ll see how they can be applied to implement powerful text rewrites that replace the matching parts of the input string in a single scan.

Let’s introduce some definitions before proceeding to the main part.

A finite-state automaton (FSA) is an abstract device that has states and transitions between those states. It’s always in one of its states and while it reads an input, it switches from state to state. Think of it as a directed graph. A state machine has no memory, that is, it does not keep track of the previous states it has been in. It only knows its current state. If there’s no transition on a given input, the machine terminates.

The transition relation means that from a given state on a symbol from the alphabet we transition into a set of states (non-determinism). FSAs are used for recognizing patterns in text. For example, the machine in Figure 1 recognizes strings that start with an ‘a’ and are followed by an arbitrary number of ‘b’s.

is a binary string relation. If for each string of \(R\)’s domain we have exactly one output, then \(R\) is a function. We denote concatenation of word tuples with \( \cdot \) being the string concatenation operator:

FSTs are automata with two tapes, namely input, and output tapes. The only difference with FSAs is that when FSTs transition to a state from a given input symbol, they also perform an output. FSAs recognize strings whereas FSTs recognize tuples of strings.

Now we switch our attention towards text rewriting and namely how to express it from a set-theoretic perspective. This idea is introduced in the paper “Regular Models for Phonological Rule Systems” by Kaplan & Kay which you can find in the references below.

where \(E\) is a regular expression and \( \beta \) is a word. During the scan, when the rewriter recognizes a string from the language of \(E\), it replaces it with \( \beta \). We can represent a rewrite rule as a regular relation and thus we can build a corresponding finite-state transducer. Let’s see an example. 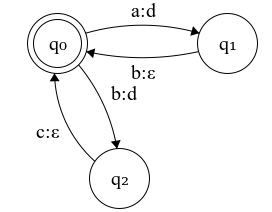 The FST from Figure 3.1 serves of a little practical use because it translates exactly the words in the function’s domain \( \{ ab, bc \} \). We want to build a transducer such that it would work on arbitrary texts and translate multiple occurrences of words in this domain. Consider the text

now let’s underline the replacement candidates, according to the rewrite rule \( ab|bc \to d \)

We can partition the input text into segments:

such that the \(v_i\)’s belong to the domain of the transducer (in our case \( dom(T) = \{ ab, bc \} \)). The \(u_i\)’s are arbitrary strings from \( \Sigma^* \setminus dom(T) \) and for those strings, we want them to be appended to the output as they are. Before we formalize this procedure, let’s introduce the identity function on a set of strings. 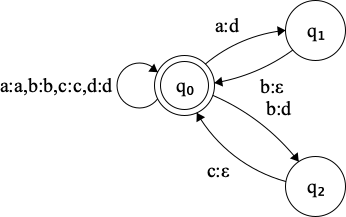 Figure 3.2: Transducer for the optional rewrite relation induced by T

Let’s process the following text through the optional rewrite transducer.

The transducer will result in 4 successful paths for this text, hence we have 4 different translations. The optional rewrite relation is simple, yet not very practical because realistically we’d rarely want to skip rewrites.
Now, let’s define the obligatory rewrite relation induced by the transducer \(T\) for the rewrite rule \(ab|bc \to d\).

The obligatory rewrite relation \(R(T)\) is also regular, thus we can build the corresponding transducer. 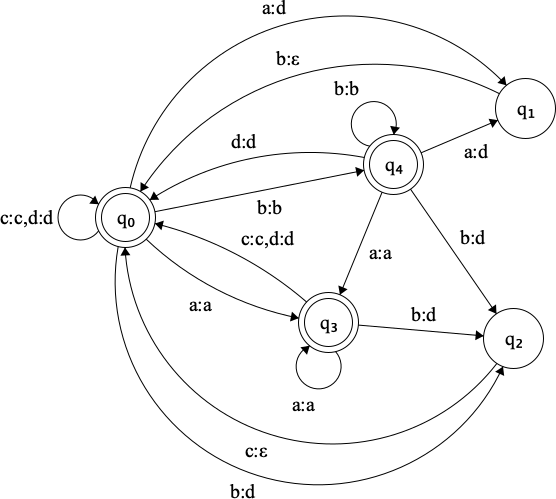 with a state path

In practice, we might want to have multiple rewrite rules. So far we’ve learned that each rewrite rule is a binary regular string relation and that these relations can be represented by finite-state transducers. Suppose we have the rewrite rules

then for each rule, we can construct a corresponding FST

Think of it as function composition in programming. The order here matters because the first transducer processes the input text, whereas the rest of the transducers work on the output of the one before them. As a rule of thumb, we should always order the rewrite rules from the most specific to the least specific one. Let’ see an example.

Description of a direct composition algorithm is out of the scope of this article, but you can find some resources in the references.

In this article, we’ve overviewed the text rewriting problem from a set-theoretic perspective. We’ve seen how the rewrite rules can be represented as regular string relations which on the other hand have an equivalent formalism namely the finite-state transducers. We’ve covered the differences between automata and transducers and saw how the latter can be extended to work on a larger set of inputs via concatenating string relations. We’ve also learned that the transducers can be composed in a single transducer which applies a set of rewrite rules.

Some text can contain conflicting parts. Consider the “abc” and the rule \( ab|bc \to d \). The transducer in Figure 3.3 is not able to make a unanimous decision, thus, it will output both “dc” and “ad”. In the following articles, we’ll discuss some conflict resolution strategies and how to incorporate them within the means of regular sets and relations. We’ll also narrow down the scope and work only with deterministic devices for obligatory text rewriting as they’re more interesting from a practical standpoint.

You can find examples and resources on how to efficiently construct FSTs in the references below.

If you’re interested in formal language theory & language processing, you can check out these articles as well.